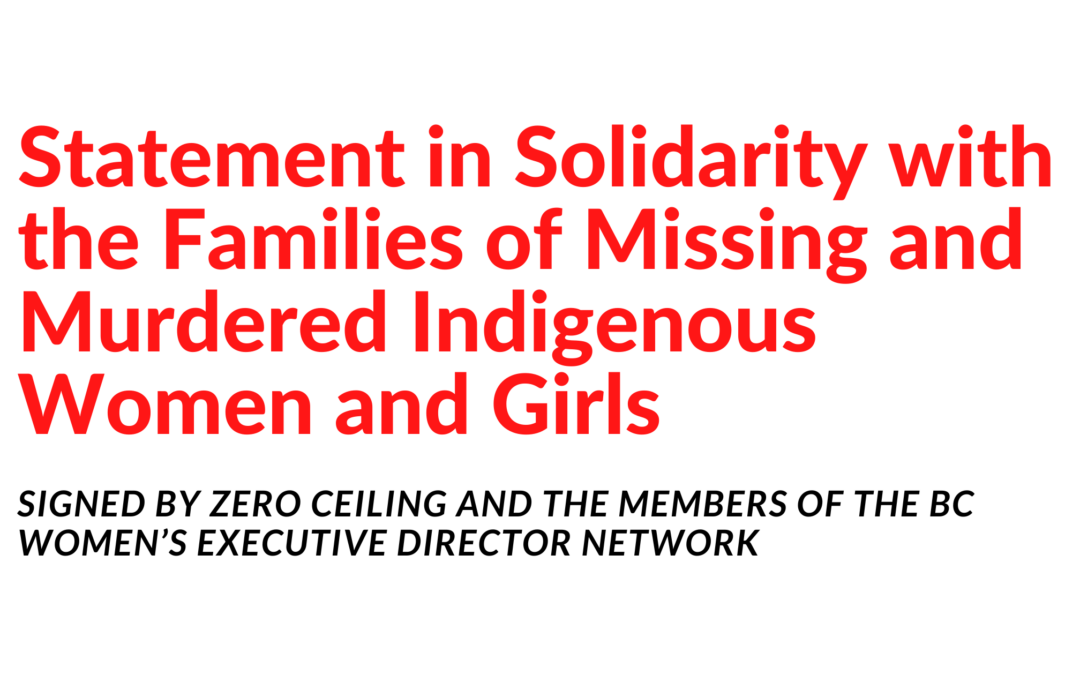 VANCOUVER, BC – “One of the things that makes this National Inquiry unique is that we are not investigating a past wrong, but one that is still ongoing and that is getting worse. Acts of violence stemming from the structures of colonization and coupled with racism, sexism, homophobia, and transphobia are not few and far between, but pervasive, immediate, and urgent. However, this violence is also preventable – if Canadians are willing to change.”
– Page 85 of Reclaiming Power and Place: The Final Report of the National Inquiry into Missing and Murdered Indigenous Women and Girls

We, the BC Women’s Executive Director Network, stand in solidarity and sorrow with the women, families, community members, Nations and advocates in Manitoba who have been irrevocably harmed by the racism and unfettered violence that has led to the loss of Rebecca Contois, Morgan Beatrice Harris, Marcedes Myran, and the yet to be named fourth victim.

We have no doubt these women were targeted and brutalized because of their gender and Indigenous identities.

Indigenous women, girls, and two spirit people have the right to live a life free from violence on their own lands. Our country continues to violate this right through inadequate protection of Indigenous women and girls.

The reality is that in Canada thousands of Indigenous women, girls and two spirit people have been murdered or have gone missing throughout this colonial country’s past and present. Another undeniable reality is that this violence consistently fails to garner adequate or sustained attention from governments and citizens.

This lack of attention continues to have consequences. Inaction and indifference to the loss of Indigenous lives, particularly women, girls, and two spirit people, has created a world where Indigenous women are 4 times more likely to be murdered than all other women in Canada. This is simply unacceptable.

The recent events in Manitoba demonstrate that the government’s lack of action regarding the findings of the National Inquiry into Missing and Murdered Indigenous Women and Girls in 2016 has enabled an environment where irreversible harms continue to be perpetrated against Indigenous peoples across the country.

We call upon senior levels of government in Canada to take urgent and meaningful action on the calls for justice from the National Inquiry into Missing and Murdered Indigenous Women and Girls.  If not now, when?

BC Victims of Homicide, a program of the BC Bereavement Helpline

BC Society of Transition Houses

Big Sisters of BC Lower Mainland

ONE TO ONE Literacy

SOAR (Supporting Survivors of Abuse and Brain Injury through Research)